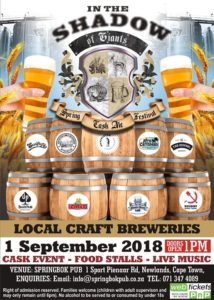 In the Shadow Of Giants

Shackleton Brewing Company and Springbok Pub are hosting a #SpringDay Cask Ale Festival aptly named “In the Shadow of Giants.” This name draws reference to the location of Shackleton Brewing co. as both the mountain and big institutions literally and figuratively cast a shadow over our venues.

This festival is aimed at creating and acknowledging the culture of cask ale in South Africa. Shackleton Brewing co. was founded by the principle of producing ‘real ales’, hence we have invited other microbreweries to join in on a day that celebrates these beers. We are inviting some of Cape Town’s finest breweries to participate and bring their rendition of a cask beer.

Live music and a DJ to ensure you are well entertained throughout the evening. The line-up will be as follows:

Get your tickets via webtickets today for only R80! Or buy them at the door for only R100.

The first 100 people through the door, will also get a FREE 500ml Craft Beer Glass! 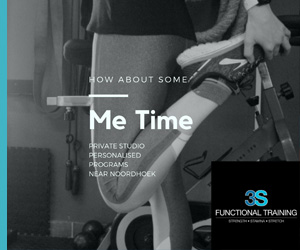